Bakery Concepts International has announced that it has been granted new patents for its Rapidojet technology. The two patents relate to:

The Fields of Invention and Background Relate to:

The apparatus uses supplemental air augmentation to improve the distribution of the material presented to the mixing chamber for hydration, including flour, bran, whole wheat, a full range of hydrocolloids and whole grains.

The mixing chamber evenly distributes ingredients as they pass the liquid spray nozzle, resulting in uniform hydration. The liquid can be sprayed at a variety of pressures to achieve varying levels of granule hydration. 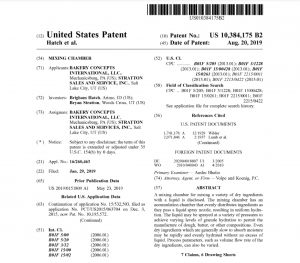