How Well Do You Know Mixing?

The Science of Mixing—part of BAKERpedia’s Academy series—was held at The Wheat Marketing Center in Portland, Oregon. It covered mixing, hydration and the requirements for a good mix. Along with the chance to connect with bakery experts and peers, it was also an opportunity to showcase the innovative power of the Rapidojet technology.

During the class, we ran a series of demonstrations with Rapidojet and how pre-hydration mixing compares to conventional spiral mixing. Here’s what happened when Rapidojet was used:

How is this possible?

To understand this, let’s summarize what mixing does:

Yet one of the most important aspects of the mixing process is also the least understood—the role of gluten hydration. Right now, the research simply isn’t there to explain the mechanism of it. What we do know is that gluten is not fully optimized unless it is fully hydrated. And, it loves water!

During conventional mixing, flour particles rub against each other to expose the next layer for hydration while aligning and developing gluten proteins. However, this method also creates friction and heat. It also takes a long time to develop the dough. In addition, Vital Wheat Gluten, Bran, Starch and other highly hydroscopic ingredients do not become fully hydrated when added to the mixing bowl. 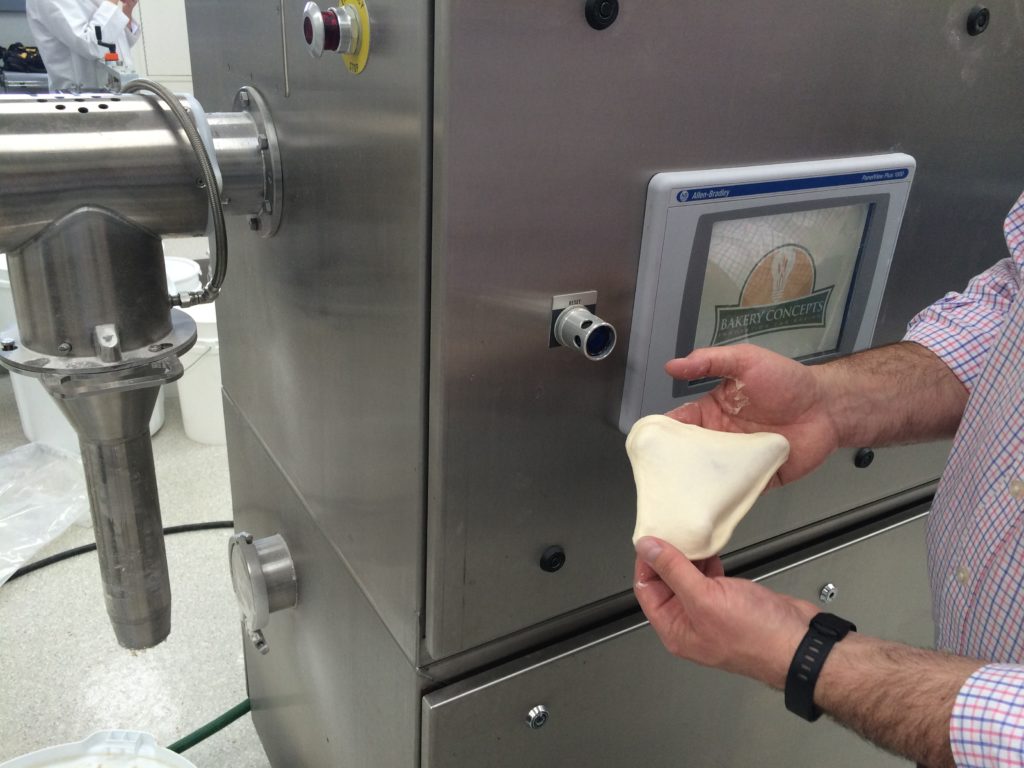 Pre-hydration of flour results in a fully developed dough within a short time.

In Rapidojet mixing, a range of dry ingredients are first shot with a high-pressure water stream. Rapidojet instantly and fully hydrates these ingredients while adding more oxygen to the water. This reduces fermentation times. In addition, when gluten is fully hydrated, its functionality is enhanced and the dough develops immediately without further folding or kneading.

If the formula calls for more than flour, water and yeast, the flour can be pre-hydrated before mixing in the other ingredients (for homogenization). This pre-hydration method instantly develops gluten structure which significantly reduces mixing time—up to 65%. When mixing time is reduced so drastically, it results in less frictional heat. Therefore, doughs produced with this method need less ice or glycol to maintain the optimal dough temperature of 80ºF. The incoming flour temperature will be the wild card.

Pre-hydration of dry ingredients also has a wider reach than just flour. Rapidojet can be used to improve bran or sprouted grains. For instance, it creates more bound water in bran, and helps reduce sprouting time for grains. All of this was demonstrated during the class.

This is an exciting time for the baking industry and the future of mixing as we find new ways to utilize Rapidojet. The seminar was a wonderful chance to share this message.  As summarized by Richard Junge, a bakery expert: “Your imagination is your only limitation.  Rapidojet opens a new chapter—yet to be written—for the science of hydration and the benefits offered to the baking industry.”

About the Author: Ken Schwenger

With over 30 years of experience in multiple aspects of the commercial baking industry, Ken offers detailed knowledge of both formulation and process with a thorough understanding of the needs of multi-unit retailers, artisan bakers and large volume commercial bakers.

Get Your Free Whitepaper:
How To Increase Grain Hydration